Most of Petula's original shellac and vinyl recordings in English can now be found on CD, thanks primarily to the efforts of Richard Harries, Jim Pierson, Tony Heester and Michael Balzer. Likewise, much of Petula's European catalog has also made its way onto CD, thanks primarily to the efforts of Christian Guillet and David Hadzis via the spendid French Anthologie series which has released much of Petula's French Vogue catalog and the stunning BEAR FAMILY BOXED SET, which features ALL of Petula's German, Italian and Spanish recordings originally recorded for the Vogue label. 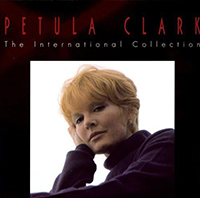 The vast majority of Petula's vinyl recordings were issued by Vogue, which had subsidiaries all over the world. For the true collector, there are thus rare recordings to be found from such places as Israel, Argentina, South Africa, India and various parts of Asia. Of these, the JAPANESE ISSUES are extremely rare, especially the ones that feature never-seen-before photographs and gatefold covers. There are also numerous BOOTLEG ISSUES FROM TAIWAN which have become quite collectable. These are generally inferior quality copies of her American or British hit albums on red, orange, green or yellow vinyl with poorly xeroxed art work.

Although Petula has recorded several excellent entirely new CDs in the past few years, numerous Petula Clark CDs are also issued each year from master recordings originally pressed on vinyl or single tracks hidden away in a vault somewhere. Every year more of Petula's vast vinyl catalog is being released on CD. Castle/Sanctuary spent many years exploiting their vast holding of Petula recordings by reissuing material they'd acquired from various sources, the FRENCH ANTHOLOGIE SERIES issued all of Petula's French recordings and the Jango label which owns only ONE album of Petula recordings (entitled "Give it a Try"--half of which are re-recordings of her sixties hits) continues to license tracks originally recorded for their long defunct label to hundreds of budget labels. (It's the very same album over and over again, the only difference being the packaging.)

Beyond this, Petula recordings can also be found upon countless COMPILATION RECORDINGS. Only a noteworthy few are included herein.

Needless to say, Petula Clark's discography is vast. An attempt is made here to compile a complete listing. But we're only kidding ourselves. This list barely scratches the surface. As one fan (the proud owner of one of the more extensive Petula collections) has been noted to lament: "A complete Petula discography is nearly impossible to compile. How would you know that you've got them all? Just as soon as you're certain that the list is complete, another turns up."

This Petula discography was originally compiled by Joe Shields based on Terry Young's very thorough IPCS issued discography and has since been updated by Laurie Parsons Zenobio based on a variety of sources, beginning with Record Collector's Complete Petula Clark Discography from January '86 (hardly "complete" but a nice listing nevertheless,) the Bear Family International Collection, Jim Pierson and Richard Harries' "Battersea Park" discography and input from a wide variety of serious Petula Clark collectors and miscellaneous resources. Many of the cover sleeve pictures are from the collections of Mike Jones, Laurie Parsons Zenobio, Roger Evans, Daniel Bédard and Peter Karsch. Special thanks to Roger Evans, Theo Morgan-Gan and Daniel Bédard for their invaluable assistance on the updated compilation.