As a Latin teacher, Chips was totally uncompromising. He ruled his class with an iron fist. It earned the boys' respect and sometimes their defiance.

Flossie from Fulham" in action. That was how Chips, an unwilling spectator at the brash music hall show, first set his eyes on his wife.

Meeting again by chance on holiday in Greece, Katherine and Chips saw more of each other.

He was, she decided, the nicest man she had ever met.

After meeting again in London, the pedantic middle-aged schoolmaster and the gay, extrovert actress fell in love.

But troubles lay ahead. While most of Chips' students and colleagues welcomed his show-biz bride, some of the parents did not. It cost Chips the chance of becoming headmaster and very nearly his marriage.

Yet somehow Kathryn and Chips survived the difficult early years and as the years went by, their love grew and deepened.

Only when war broke out was Chips made headmaster at last, but he couldn't share the news of his triumph with Katherine.

That same day while entertaining the troops, she was killed in an air raid.

When the war ended, Chips had to retire. But having devoted his entire life to the school, his memories and the new boys at Brookfield still continued to fill the remaining days of his life. 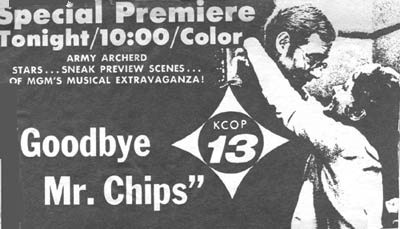