Petula's Commercial Appeal
In her career, Petula and/or her singing voice have been featured promoting a wide variety of products. . .

Heathrow Airport - 2017
It's A Wonderful Flight - Television
Petula is featured in the soundtrack as Heathrow Airport reveals their second Christmas advertisement featuring the 50-year love story of Doris and Edward Bair, who were introduced in 2016 as the Heathrow Bears. In the newest edition of Heathrow's festive fare, Doris and Edward grow closer with every Christmas that passes, as Petula Clark's Couldn't Live Without Your Love hums in the background. An elderly couple kiss at the now-closed Heathrow Terminal 1. The advert celebrates the much-romanticised historical days of air travel, when flying was by default glamorous, rather than budget and thrifty. Watch for a cameo by Petula.


"It's the Burlington look--it's the Burlington air. . ."
Spokesperson for another lavish campaign, this one featured Petula singing and dancing on television and also appearing in magazine ads to promote a wide variety of Burlington Mill products--from carpets to socks.
Astraka
Print ads (UK)

Photographed in Miss Clark's chalet in the Alps.

The Coca-Cola campaign featured most of the top singers of the day (Supremes, Tom Jones, Bee Gees, Lulu, Lesley Gore, Neil Diamond, Jan & Dean, etc.) singing a Coke jingle--tailored to the singer--on television and radio and posing with the omnipresent bottle of Coke in full page magazine spreads.

Four different versions of Petula's Coke jingles can be found on the "I Love to Sing" box set. 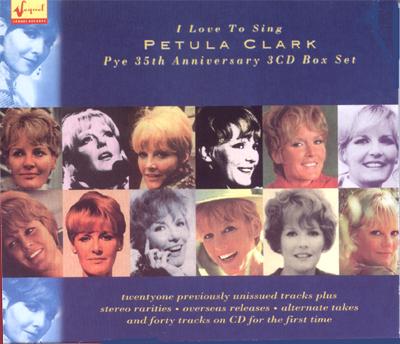 [No longer in print. Available as a collector item on Amazon and eBay.]

A lavish campaign, for which Petula was the primary spokesperson, appearing in print ads, television commercials and doing voice-overs in radio spots.

One of Petula's beauty secrets.

Another of Petula's beauty secrets!
Also promoted her new film Made in Heaven

Regent Oil Company
The Right Spirit
(UK) Pearl & Dean produced advertisement which played in cinemas as a two-minute long short featuring Petula and Desmond Carrington as a young couple who are driving an old car that breaks down.

This is a great little item from the late 1940s. It is a 4 1/2" x 3" card containing 12 Blend-Rite Hair Grips (made in England by Newey Bros Ltd.) The back of the card specifies all the benefits of this particular brand of hair grips. What makes this such an interesting item is that the card is one of a series of British Film Stars. It is card No.5 and the front features a picture of Petula who was then under contract to the J Arthur Rank Organisation. The names of three of the films in which Petula has starred is also printed.

Not a Promotion at all

The 'Petula Clark' Rose
Neither photographed with nor spokesperson for the "Petula Clark" rose," Petula was nevertheless the inspiration. This lovely hybrid bush tea rose was once sold in nurseries across the UK. A few British fans still have them growing in their gardens.
[True Petula devotees would have selected a YELLOW rose in her honor.]